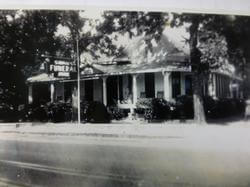 Swain Funeral Home is one of the older established businesses in Baxley.

In the early 1900s, Mr. W. W. Morris owned The Morris Undertaking Co. Mr. Morris' niece, Lillie Johnson Morris, married Warren E. Swain Sr. who then became a partner of the funeral home & the name was changed to Morris-Swain. After the death of Mr. Morris in 1930, the business continued for a short time.
When Warren E. Swain, Jr. returned home from serving in the Air Force following World War II, he attended Cincinnati Mortuary College and became a mortician. Then, with his wife Ruth (White) Swain by his side, he restarted the family business as Swain Funeral Home in 1948.
Swain Funeral Home was first located in the W. W. Morris house but in 1972 relocated to its current location on U. S. Highway 1 North of Baxley where fourth generation family member, Wesley W. Swain and his staff continue to serve the community with the highest quality of service.

The caring and experienced professionals at Swain Funeral Home are here to support you through this difficult time.  We offer a range of personalized services to suit your family’s wishes and requirements.  You can count on us to help you plan a personal, lasting tribute to your loved one.  And we’ll carefully guide you through the many decisions that must be made during this challenging time.

You are welcome to call us at any time of the day, any day of the week, for immediate assistance.  Or, visit our funeral home in person at your convenience.  We also provide a wealth of information here on our web site so you can learn more from the privacy of your own home.

A year of daily grief support

Our support in your time of need does not end after the funeral services.  Enter your email below to receive a grief support message from us each day for a year.  You can unsubscribe at any time.